By now, many will have seen the video of a PC wrestling on the floor of a shop with a young man called Rashan Charles. It’s ugly, violent, and makes for unpleasant viewing.

For several years, I was the duty Inspector at Stoke Newington police station in North London, where this took place and where, last night, crowds of angry protestors gathered. ‘Black lives matter’ placards were popular and a lot of anger was being vented against my former colleagues.

Cries of ‘police murderers’ were to be heard and demands for the PC involved – and others – to be punished, to face ‘justice’.

On social media, mostly twitter as it is so fast, anti-police feelings had been whipped up.

For me, it was all rather familiar. This was the Stoke Newington I used to work in and which I had recently been led to believe had been ‘gentrified’. Perhaps not as much as people hoped, I fear.

‘Stokie’, as we used to call it, used to be the most socially deprived area in the whole of the UK. Poverty, crime, poor housing and commensurate sub-standard facilities were the norm. Much has been done to improve that situation, that has to be said and recognised. But old feelings run deep, and the speed with which this outcry grew makes me suspect that things are not as good as was hoped.

But what of this incident, and of the actions of the PC? Are those crying ‘murder’ correct to label what they see on a video as that most serious of crimes?

If Rashan had been trying to shoot or stab himself, we would all immediately recognise the danger he was in and this PC would be hailed a hero for trying to save him. The fact that he was -allegedly – trying to swallow drugs that could easily result in his death is not commonly seen as endangering his life – but it is just as serious, and, if this PC knew that, it’s quite possible he tried to save a young man from his own reckless action.

I’ve wrestled with a man trying to stab himself. And I’ve also wrestled with people trying to swallow drugs and I know how risky it is as they squirm and try to bite you. And you know that a bite could be the end of your career or, possibly, your life. People, particularly drug users, carry diseases and viruses like hepatitis and HIV. So, knowing that, ask yourself if you would prepared to stick your fingers into the mouth of someone swallowing what looks like drugs knowing the risk if they bite you?

I’ve known success and drugs recovered, but I’ve also seen PCs bitten, and I’ve sat with a man as I tried to persuade him to, at first, spit the rocks of crack from his mouth and then, as he swallowed them, to stick his fingers down his mouth to regurgitate them. I failed – he was lucky, when a hospital stomach pump did what he wouldn’t do himself. He was more afraid of what he saw as me trying to trick him into ‘bringing up’ the evidence of his crime than he was worried about the risk of dying. 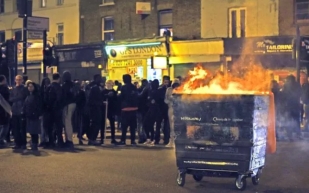 Wrestling with people in circumstances such as this is ugly and it’s violent. An arrest of often an ‘exercise of force’, especially when an alleged perpetrator really doesn’t want to be detained.

Saving life sometimes can be mistaken for something else entirely. But as angry, prejudiced and mis-informed people jump to conclusions, their anger fanned by others who appear to actually enjoy the attention, it saddens me at their apparent lack of objectivity, their prejudice, their lack of interest in being patient and waiting for an inquest, their assumption that their views must be right, and it especially saddens me that some amongst them are trying to whip up feelings in order to further their own agendas rather that reflecting on the very, very sad death of a young man who has died in such tragic circumstances.

So, let’s take a moment to reflect. A young man lost his life in circumstances that have yet to be fully explained. Let us implore the angry protectors to wait and not to succumb to the momentum of the lynch mob. Let us accept that anger and violence never are never the solution, they only makes things worse.

And let’s remember, violence is a disease, a disease that corrupts all who use it, regardless of their justification.

2 thoughts on “#JusticeforRash – but not from a lynch mob”