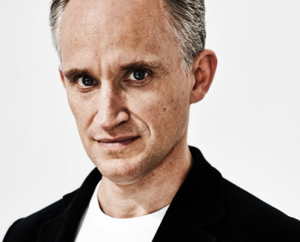 7th October 2017 8pm at Crickhowell Literary Festival I get to meet and interview Harry Bingham.

At the time of writing, I’ve had quite limited contact with Harry but I’ve already concluded he is quite a character. I also confess that, until now, I hadn’t read any of his DC Fiona Griffiths crime novels.

But I have heard of Harry.

Many of you will have seen this incredible picture on social media and wondered who it was. Well, now you know.

Harry Bingham is a character himself, and as sure as eggs are eggs, when he turned his mind to crime-fiction, he was going to come up with a protagonist the likes of whom people will have never seen before.

And so was born Fiona Griffiths.

We first meet Detective Constable Griffiths in ‘Talking to the Dead’, a novel set in Cardiff. Griffiths is a relatively inexperienced CID officer who, due to a link with a fraud she is looking into, finds herself helping out on a team investigating two very unpleasant murders, of a mother and her daughter.

I’m familiar with Cardiff and the surrounding city so, for me, it made a nice change to see areas and streets I know feature and to learn something about the region as the story unfolded.

We also learn a lot about Fiona Griffiths; her family links to the criminal underworld, her unusual yet focussed personality, her ability to think outside the box, her struggle with inter-personal relationships and, perhaps most interestingly, her struggle with overcoming a childhood mental illness.

Griffiths is a maverick, the kind of detective that senior officers love and loathe in equal measure. She does things that most police officers would consider crazy and which we would never risk doing ourselves. She does the things we would like to do, but which fear of the law and the police disciplinary system prevents almost all of us from doing. And she gets results.

Harry asked me before I read the book if, as an ex-detective, I might cast an eye over his police procedure. I was more than happy to and I will tell him when I see him that yes, there are one or two rather unusual police related decisions and methods that I haven’t personally seen before. But I will also tell him this, and that is my impression that it matters not one jot. This book delivers and it thrills, just as a crime-thriller should. I’ve abandoned rather too many books recently and was so pleased to find one that kept me reading and kept me hooked.