A reason to write.

I’ve spoken many times on how a form of therapy that included writing helped with my treatment for PTSD.

And I’ve explained that it was a comment made by my counsellor that first planted the idea in my mind that I might write a book.

To explain, I need to take you back to 1985. I was a PC in those days, and had just passed the promotion examination to become a sergeant. I was posted to Tottenham and Hornsey police stations for a short period to work as an ‘acting sergeant’ while I waited to go on my pre-promotion course at Hendon police college.

On my first evening at Tottenham, a young black lad came running in from the street, screaming and shouting. He jumped over the front counter towards me and collapsed in a heap on the floor. I moved towards him and saw blood, a lot of blood spreading out on the floor around him. He had been stabbed and had run into the police station to escape his attacker. This was my first introduction to Tottenham in the 1980s.

I also spent some time at Hornsea Police station where I met a sergeant called David Pengelly. David gave me some tips about the job and about what to expect on my sergeants course. He introduced me to some of his community beat officers, we called them ‘homebeats’ in those days, including PCs Keith Blakelock and Richard Coombes.

I left Tottenham when my course started. As I did so, I was aware that trouble was brewing in the local area. Mobile car patrols had been stopped on certain estates and foot patrolling in those area was only being done by well-known local PCs and, even then, they were always in pairs. There had been some sporadic outbreaks of hostility towards police officers and some vehicles had been damaged by stone-throwing youths. It seemed that the area was a powder keg just waiting to explode.

On 5th October 1985, the Broadwater Farm riots started. David Pengelly, the sergeant who had befriended me at Hornsey, was deployed with several of his homebeat officers into the fray. They were ill-prepared, inadequately equipped and completely unaware of what they were going into.

Police during rioting on the Broadwater Estate in which PC Blakelock would be killed.

That evening, in the darkness and confusion on an estate they were unfamiliar with, they were stoned, petrol bombed and, eventually their position was over-run and they were isolated. They ran for their lives. Keith Blakelock slipped on wet grass, fell to the ground and was set upon by the rioters. He was killed, stabbed and hacked to death. Showing immense bravery and armed with ridiculously inadequate wooden truncheons, PC Coombes and others attempted to rescue PC Blakelock while Sergeant Pengelly fought alone with the rioters to try and buy some time for his colleagues.

David Pengelly was awarded the George Medal for his bravery that evening.

But there were many other police officers at Broadwater Farm that night. As with the officers from Hornsey, they were also ill prepared for what they faced. Many were injured, all were traumatised.

Some of them were from Barnet police station, where I was posted on promotion. In the aftermath of the riot, an enquiry team was set up and all officers who had been present were told to write statements including as much information as they could about what had happened to them, what they had seen and any evidence they could include to help bring rioters to justice. 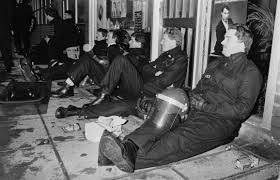 In many cases, the statements produced by the officers from my station were woefully inadequate. Often they said no more than “I went with my serial to an estate in Tottenham. We stood behind plastic shields while hundreds of people tried to kill us with petrol bombs, knives and rocks.”

I was given the job of obtaining better statements from these officers. It wasn’t easy. Many of them were resentful, angry and upset by what they had been through. Many simply didn’t want to talk about it, let alone write a statement.

I remember one particular PC, I’ll call him Andy. Andy was in his early twenties. In the months that followed the riot, Andy steadfastly refused to write a full statement. He was interviewed by senior officers and even threatened with disciplinary action but nothing could persuade him. He was thought of as a bad egg, not a good police officer. He had started drinking, often to excess and was regularly late turning up for work. He seemed to have an ‘attitude problem’ was insubordinate to senior officers and surly. One day, he was arrested for drink-driving. He was disciplined and sacked. Nobody missed him.

I forgot about Andy until many years later. I was undergoing counselling for PTSD and I began to realise that young Andy, and many of the PCs who had been at Broadwater Farm had been displaying similar symptoms to my own. I hadn’t recognised it at the time, indeed I had never heard of PTSD.

Nothing was done for them by way of counselling or post-trauma care. They were simply left to fend for themselves.

It was too late to help Andy, but I was left thinking ‘if only I had known, if only I had been aware, maybe I could have helped him’. I felt guilt as I knew that I had failed him, as had the organisation I worked for, when we allowed his behaviour to deteriorate to the point where he was arrested and kicked out of the police.

I promised myself then that I would do my level best to make amends for my failure. So, when my counsellor suggested the idea of a book, it sparked an idea. An idea that one day I might write a book that could educate and inform people about PTSD and about how it affects people’s lives.

But I knew that as one individual former soldier and police inspector, I had neither the power or the influence to bring about change, to ensure that all men and women in all the armed and emergency services are prepared for the trauma they will face and properly supported when they do. But, it occurred to me that what I might be able to do is introduce people who can influence change to the realities of PTSD, through the medium of creative writing.

And so… I began to write. And ‘Wicked Game’ was born.